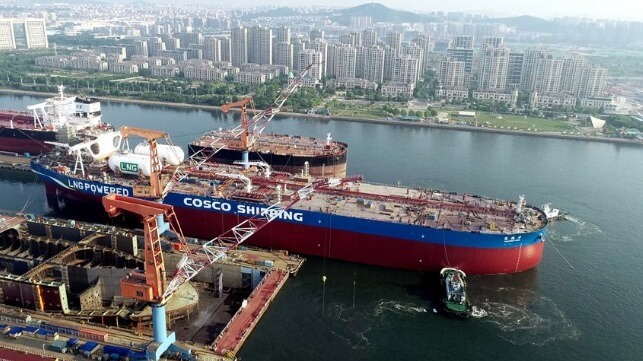 A quarter of tankers on order will use LNG, Gibson says

In another sign of the increasing adoption by the shipping industry of LNG and dual-fuel ships, as the first dual-fuel VLCC prepares for its maiden voyage, tanker operators increasingly order dual-fuel power plants for their new builds . Shipping broker Gibson, in its latest weekly report on the tanker market, calls LNG â€œThe shape of things to come,â€ based on order growth.

â€œWhile LNG has long been the fuel of the future,â€ Gibson reports that his analysis shows that a quarter of new build tankers are adopting LNG for propulsion. Gibson’s Alternative Fuel Vessel Database has over 530 vessels ranging from tugs to bulk carriers on order with LNG and alternative fuel power plants. They report that nearly five percent of orders are specific to VLCCs, after the first such inbound service for COSCO Shipping Energy Transport Co.

â€œOverall, current new construction of LNG-fueled tankers represents 23% of the current total tanker order book,â€ Gibson reports. â€œSo it looks like there is still some way to go before LNG-fueled tankers become the dominant type of ship, but as a bunker fuel it is certainly taken seriously. “

China’s first technologically advanced dual fuel VLCC will join several Aframax tankers that are dual fuel tankers. According to the shipping broker’s analysis, there are two Suezmax LNG tankers on order and 41 Aframax / LR2. There are also around 40 LNG ready tankers under construction, â€œwhich means that when the market, the charterer or the owner decides to make the vessel fully LNG compatible, the vessel can be fitted with the machinery and equipment. ‘required equipment,’ says Gibson.

After completing the construction of the structure, the first LNG-fueled VLCC continued sea â€‹â€‹trials in September 2021. Built at the Dalian Shipyard, the 1,091-foot-long vessel has a capacity of 318,000 tons while adopting many technical advances to improve operational efficiency. It uses LNG as the main fuel supplemented by fuel oil. It adopts WINGD low pressure dual fuel main engine as well as dual fuel generators and boilers and single pipe design which the shipyard says improves the safety and flexibility of operations. The vessel uses C tanks, which are common in other LNG vessels, and can operate at 12,000 nm on LNG or 24,000 in dual fuel mode. Daily gas consumption is around 60 tonnes.

COSCO ordered its first LNG VLCC in 2017, followed by agreements in 2020 with Total to charter two VLCCs running on LNG. The French company expects its ship to also enter service in 2022.

VLCCs follow the trend of an increasing number of orders for large ocean-going vessels using alternative fuels, including LNG. DNV estimated that 12% of the global order book relates to LNG-fueled ships.