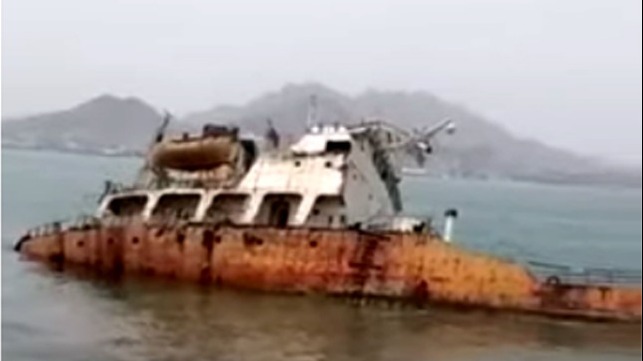 The Yemeni Public Authority for Environmental Protection reports an oil spill contaminating the water in the Gulf of Aden after one of the dilapidated tankers anchored off the port sank under unknown circumstances last weekend. Details of the war-torn country are vague, but it raises fears of a major environmental disaster in the region if action is not taken for several similar vessels, including a floating tanker containing more than one million barrels of oil and in dire need of maintenance in the area.

A spokesperson for the Public Authority told Yemeni Saba news service that the unidentified vessel began to sink last week after being abandoned for years off the port of Aden. According to the local port authority, they attempted to tow the vessel using a tug before it sank, but the operation required specialized equipment they did not have to stabilize the vessel.

Some reports suggested that the tanker may have been serving as a floating storage with other vessels in the area, while others suggested that it was simply an abandoned vessel that was previously owned by a local company. It is not known how much oil was on board, but unnamed local officials told AFP the oil had spilled about 12 miles along the coast. Local television shows footage of the oil coming ashore.

The state authority blamed the sinking on the ongoing conflict, saying the rebels were seeking to destroy Yemen’s environment. They provided no evidence that the ship had been attacked or sabotaged. They said, however, that tankers as well as oil leaks from pipelines in Shabwa are causing significant damage to the Yemeni marine environment. They called on the United Nations to act before the damage escalates and spreads to neighboring countries.

Reports said the ship is one of several dilapidated tankers in the same area, all likely abandoned and in need of maintenance. The most publicized case is the FSO Safer, a 45-year-old tanker converted to serve as a floating storage. For years, the ship had only a small crew on board who worked diligently to provide interim maintenance, but unable to resolve larger issues. Last fall, the United Nations announced that it had reached an agreement with the rebels to allow an inspection team to investigate the Safer and develop a maintenance plan. That deal fell apart this spring after months of back-and-forth negotiations and accusations on both sides, leaving the Safer still in danger of causing a serious environmental disaster. Recently, a new UN official called for a new course of action to tackle the floating tanker.

A stranded ship off Karachi has been refloated

Tourist arrested for driving Hyundai i20 in the sea in Goa