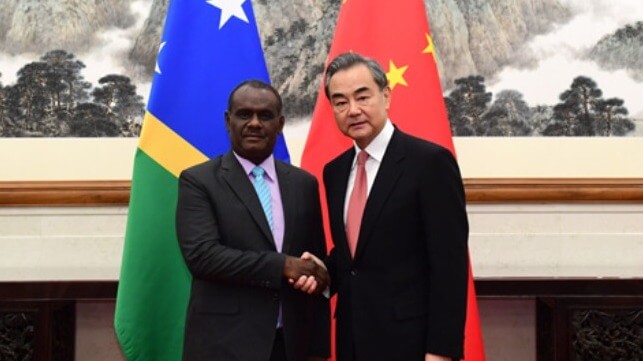 President Xi Jinping’s “Chinese dream” now stretches across the Pacific Ocean, where his foreign minister, Wang Yi, recently completed a far-reaching Pacific island tour. Against the backdrop of the sluggish Chinese economy and continued quest for global power, Wang sought to finalize Beijing’s security deal with the Solomon Islands; visited Fiji, Kiribati, Samoa, Tonga, Vanuatu, Papua New Guinea and Timor-Leste; and hosted a meeting of Pacific Island foreign ministers in Suva. Wang’s plans, however, did not all go smoothly. The Chinese Communist Party will nonetheless learn lessons from its failed attempt to reach a multilateral agreement on the Pacific.

Wang’s plans include establishing Confucius Institutes that integrate Chinese language consultants, teachers and volunteers across all the islands. Over 1,000 Samoans have already studied Chinese at the Confucius Institute at the National University of Samoa. A separate “five-year action plan” includes the appointment of a Chinese special envoy to the region, labs and hundreds of law enforcement training opportunities and high-level forums.

Wang’s proposals to cash-strapped Pacific island nations would give China a bigger footprint in the Pacific, challenging regional forums that currently uphold international law and uphold peace and security. These proposals highlight the security concerns of the region and of Indo-Pacific allies, including the United States, Australia, New Zealand, France and Canada.

What prompted Beijing to propose a regional economic and security pact with Pacific island nations? And what are the geopolitical consequences of Chinese projects for the Pacific? Responses from several countries highlight the implications and include the US reopening an embassy in the Solomon Islands after a 30-year hiatus.

China’s intentions in the Pacific have now been outlined, so it is clear why the Solomons security deal has raised international concerns. The deal, which took years to execute, is tied to Beijing’s campaign to convert the Pacific islands from allegiances with Taiwan to the People’s Republic. The cost of converting the Solomons was high, but the investment now appears to have had a strategic payoff with a window into the opening of the South Pacific for Beijing.

Wang’s tour seized the moment to further open this window. Although he failed to secure a consensus of the 10 Pacific countries for his “shared vision of development”, several countries, including Samoa, Kiribati and Niue, have signed up for enhanced cooperation under the framework of the Beijing’s Belt and Road Initiative. The Chinese government has also signaled its determination to pursue far-reaching trade and security agreements with Pacific island nations.

China’s dream of Pacific expansion ratifies several core interests. The agreement with the Solomon Islands would allow China “to send police, armed police, military personnel and other law enforcement and armed forces” and provide for “stopovers and resupply of supplies”. These elements suggest the potential establishment of a military base, although both governments deny that this is happening.

But similar deals have already been struck with other Pacific island nations that involved joining them to build military-commercial facilities in return for money and assistance. This is precisely what China wants and has been working for decades through its foreign aid program, seeking dual-use development as well as regional cyber control.

Indeed, just weeks after signing the Solomons agreement, Xi announced his intention to put in place a domestic legal framework to expand the role of the Chinese military in other countries, allowing Chinese armed forces to “to safeguard China’s national sovereignty, security and development interests”. .

The vast Solomon Islands Exclusive Economic Zone is resource-rich, filled with timber, significant fish stocks and a range of other natural resources both above and below the sea. With 1, 4 billion people, it’s no surprise that China wants to exploit the region, despite claims to the contrary.

Toppling the Solomon Islands from its long-term support for Taiwan in 2019 was a diplomatic success for Beijing. This puts pressure on other nearby island nations, especially the few remaining countries in the region that support Taipei.

A related message that has been conveyed internationally is that Washington’s (and Taipei’s) influence in the Pacific is waning while Beijing’s is growing. Domestically, Chinese state-controlled media have framed the deal as a significant strategic loss for the United States and Australia.

Another interest in Beijing’s push for soft power in the Pacific is to possibly add votes from the “Global South” to the Chinese bloc at the United Nations. Although this strategy may prove unreliable, garnering votes from South Pacific countries can help China at the UN.

Almost like a jigsaw piece, the Solomon Islands deal fits neatly into China’s efforts to reframe the world order, piece by piece, by co-opting small states. It is now clear that China’s ambitions stretch far and wide across the Pacific.

Washington reacted to the Beijing-Honiara deal by sending a high-level delegation led by Kurt Campbell, National Security Council coordinator for the Indo-Pacific, to meet with the leaders of the Solomon Islands, Fiji and PNG and record US interests and concerns, including the creation of a potential security risk to the entire region.

Indo-Pacific nations, including the United States and its allies, face a concerted assault on the rules-based international order. To assume that Beijing’s intentions are benign would be naïve at best, even if some challenges are better shared, such as action against climate change and responses to natural disasters. Secretary of State Antony Blinken recently described the US approach to China:

We do not seek to prevent China from playing its role as a great power… But we will defend and strengthen international law, agreements, principles and institutions that maintain peace and security, protect the rights of individuals and sovereign nations and will make it possible for all countries, including the United States and China, to coexist and cooperate…China is the only country intent both on reshaping the international order and, increasingly, the economic, diplomatic, military and technological power to do so.

As Federated States of Micronesia President David Panuelo warned, Wang’s “predetermined joint statement” could spark a new “cold war” between China and the West. Poorer countries like the Solomons, Kiribati, PNG, Timor-Leste and other vulnerable Pacific island nations face monumental challenges. Unless Australia and its allies effectively assist the Pacific Islands as respectful and reliable partners, they may well seek alternatives in their search for solutions.

But with the kind of assistance offered by the Chinese regime, it has been shown that there will most likely be serious strings attached and the promise of a durable security architecture can quickly be converted into an authoritarian control architecture. A taste of this was felt as Wang’s entourage sought complete control of media coverage of the tour, and his sourness was noted locally.

While the CCP will have learned lessons from this grand tour, so will the leaders of the Pacific Islands. The renewed US focus and Australia’s new, closer alignment with the needs of Pacific nations will help.

John Garrick is a Research Fellow in Law at Charles Darwin University. Yan C. Bennett is associate director of the Paul and Marcia Wythes Center on Contemporary China at Princeton University.

This article appears courtesy of The Strategist and can be found in its original form here.


The views expressed here are those of the author and not necessarily those of The Maritime Executive.