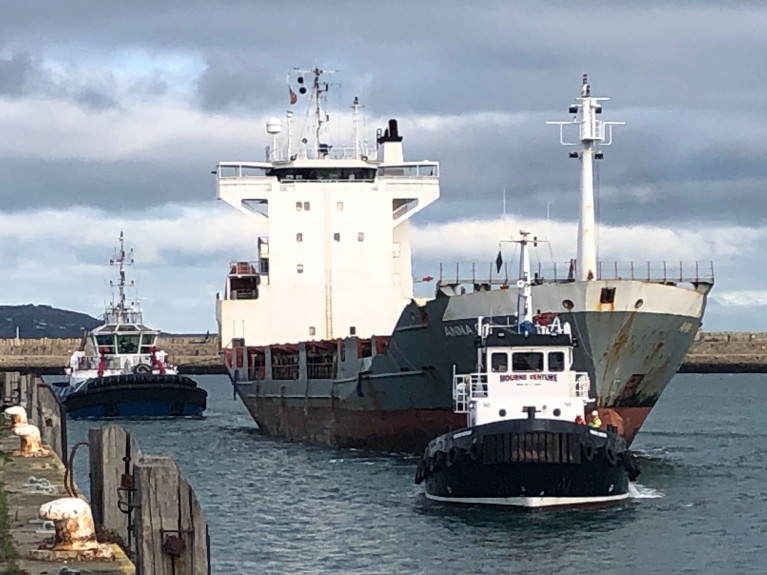 Over a month ago, in Dun Laoghaire port, the towed container ship Anna G arrived at the port to do engine repairs, but the ship remains in port, writes Jehan Ashmore.

The 27 year old Anna G with a capacity of 515 TEU had been towed from Carlingford Lough and after a 9 hour passage at an average of 5 knots the Cypriot flag container ship arrived in mid -November.

The 3,992 ton vessel is currently moored at St. Michaels Wharf (as pictured above on arrival).

According to the port operator, Dun Laoghaire-Rathdown County Council said there was no specified time frame for the completion of repairs, but only an estimate of four weeks. Various engine parts had to be shipped to Germany for machining and they have now been returned to the ship and are in the process of being replaced.

DLRCoCo added that the captain is hopeful that these repairs will be completed this week and that the ship can depart before Christmas.

So when the Anna G leaves towing will not be necessary in such circumstances, but Afloat takes a brief look at the tugs involved that have led to the Anna G berth along the St. Micheals Wharf in the Harbor.

Towing duties were first assigned to the Morne Venture. The veteran escort tug built in 1981 with a 32.9t bollard pull towed the Anna G which was in Warrenpoint harbor. The tug is operated by Carlingford Lough Pilots Ltd, based in Newcastle, County Down.

Upon arrival in Dublin Bay, the container ship was assisted by Giano, another 25m long tugboat only dating from 2015. The double-ended tug Azimoth has 60t pull and is operated by Purple Water Towing Ltd with an address in Mary’s Abbey, Dublin.

The two tugs fly the British civilian flag of the “Red Duster”.