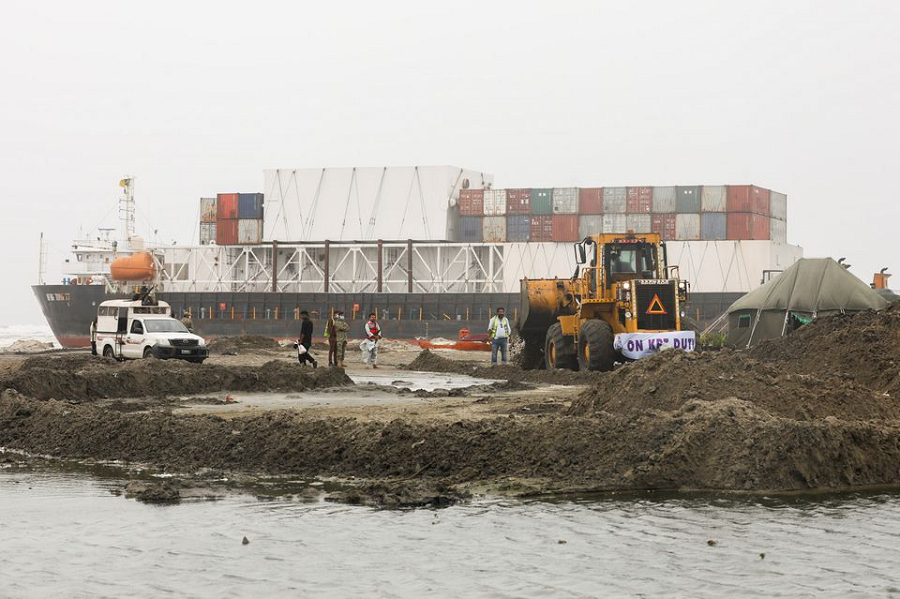 The first phase of rescue operations from a stranded container ship MV Heng Ton was successfully completed on Monday, as it broke free from the sand and slipped about 100 meters into the sea.

Two tugs, a crane barge, operational boats and special girls have been used in the process while the process of towing the vessel on the high seas will be completed on Tuesday, said ship captain Asim Iqbal.

“The vessel’s engine and propellers, the MV Heng Tong 77, are in good condition and will be started once she is in deep water,” Iqbal said. He said the ship was towed into the sea using a tug and a boat carrying a crane according to a plan, adding that there would be high tide at 11:00 p.m. as well as tomorrow and during that time. , the vessel will be towed for a further 100 meters.

The shipping agent said that after the vessel arrives in the deep water, it will be towed directly with the tug and will be taken to the dock a day after the refloating. Asim said the ship’s two engines have been started and its two propellers are working properly, which will be used to refloat and bring the ship to dock.

Coastal Affairs Ministry adviser Mehmood Moulvi also visited the site and, while speaking to the media, claimed the vessel would be towed into deep water by tomorrow and would be kept in government custody. before it becomes fit for a sea voyage.

He said the vessel would be technically examined while docking at Karachi Port and would be repaired to make it fit for sea travel. The advisor said Karachi Port will receive anchoring and provisioning fees. ‘other installations while an authorization must be obtained from the Department of the Mercantile Marine and until the seaworthiness report is issued to the vessel, it will not be authorized to depart.

The adviser further stated that the vessel would not be cleared until it was fit to travel and in the event that it was not fit to travel it would be towed.

UK has the opportunity to decarbonize its fishing fleet after Brexit

Afghanistan: Ex-Marine Pen Farthing says he will have to put animals to sleep on the Kabul trail after UK ‘abandons’ charity | World news