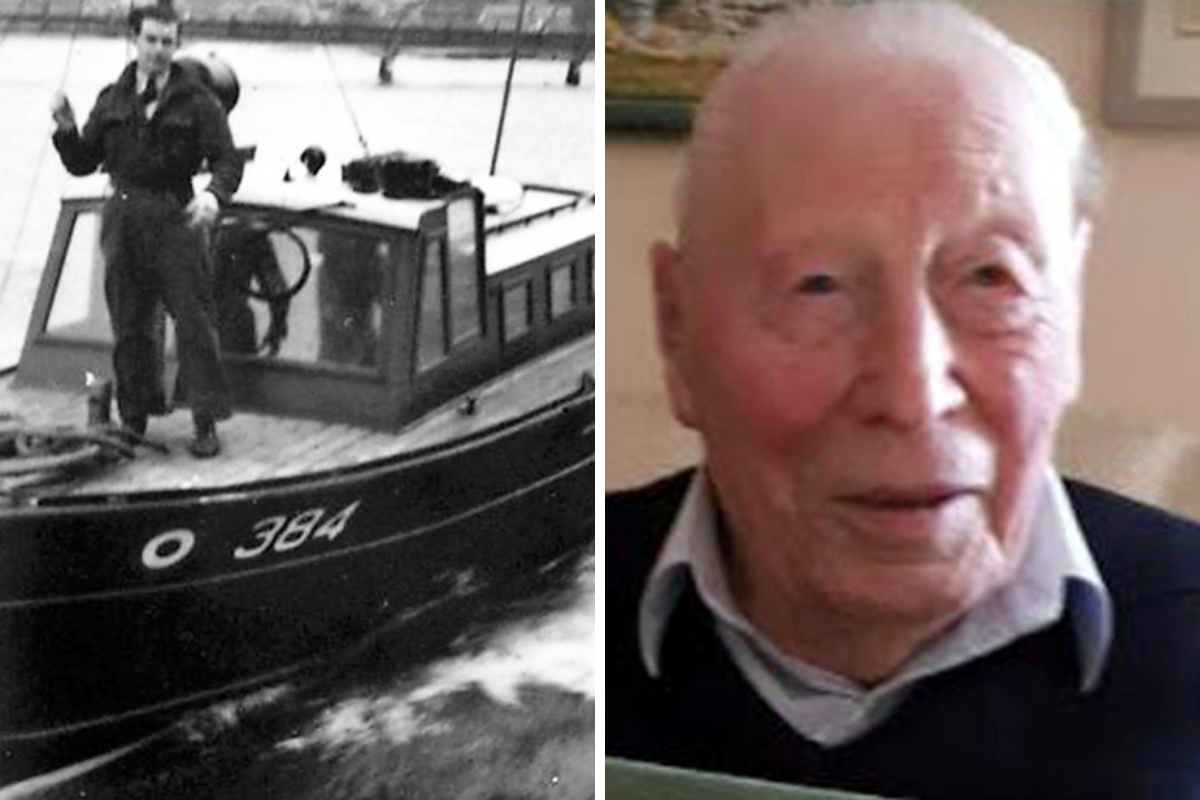 A POPPY cross is placed annually at the Marine Aircraft Experimental Establishment (MAEE) Memorial at Helensburgh’s Kidston Park to mark Remembrance Day – and this year it has special significance.

The memorial, erected by the Helensburgh Heritage Trust and the Airfields Conservation Trust, commemorates not only those killed while serving in RAF Helensburgh during World War II, but also the hundreds of men and women who once lived there served.

The last surviving man to work there is believed to be former RAF Corporal and Coxswain Eric Haynes, who died on December 20 last year at the age of 101.

Eric spoke at length to MAEE researcher and author Robin Bird about his service in the marine section, which was formed in 1942 as the war on German submarines escalated.

The section also served seaplanes at Helensburgh and those away from the base, and Eric’s duties extended to RAF Prestwick, RAF Dumbarton, Loch Lomond and Denny Shipyard in Dumbarton, all facilities used by the MAEE.

Eric in uniform during WWII

Like others posted to RAF Helensburgh, Eric discovered that the real posting was based in Rhu. The road to Rhu will lead Eric to meet his future wife who served in the Women’s Auxilliary Air Force.

The section consisted of 40 men. Eric was the coxswain of the Gareloch-based ST384 dinghy, which was also used in top secret trials on Loch Lomond.

He recalled that to bring ST384 to Loch Lomond, you had to sail to Dumbarton, where the tender was lifted out of the water. It was then taken by road to Balloch and launched into the River Leven.

â€œI got on the ST384, started the engines and we sailed slowly over the loch and moored at the allocated jetty,â€ he said. â€œWe lived on board for the duration of the tests.

A secret trial involved the dump bombs. The theory was similar to the Highball tests conducted by the MAEE on Loch Striven. The concept of a “jump bomb” was initiated by Lord Nelson who was blasting cannonballs across the sea at enemy ships.

The Prestwick MAEE pilots carried out the jump attacks against a dummy target that represented the hull of a ship. It was marked in the center just above the waterline where, on a ship, the steel plating was thin and the engine room located.

READ MORE: Eye on Millig: The boat designer from Rosneath who made the Silvers shipyard world famous

One sunny day, the planned plane did not arrive from Prestwick. Helensburgh seaplanes were not suitable for jumping-bomb testing, which is why land-based planes were used.

Eric was instructed to contact Rhu to find out what was wrong. He used ST384 to get to Luss village and called the policeman to phone Rhu. It turned out that the plane could not fly due to engine problems.

Another test undertaken on Loch Lomond was the anti-submarine bomb test. The dummy bombs were recovered as quickly as possible, as if they had been damaged, they lost their buoyancy and sank.

Radio messages to and from Loch Lomond were poorly received due to the mountainous region so kites were used to amplify the signals.

The most secret loch test involved rocket-powered models of the proposed RS1 jet seaplane. It would be a world first in aviation developed by RAF Helensburgh.

Chippies originally made some of the models, others were made in Glasgow. They were launched from the water by ST384 at different speeds. A stopwatch was used as the tug did not have a speedometer. On a few occasions, rocket-powered flying models have exploded in the sky, but successful tests have recorded the behavior of water and flight.

The first Saunders Roe SR1 jet seaplane was flown by the MAEE in July 1947, and it can still be seen at the Solent Museum in Southampton. Three SR1 jets were built, but two crashed. The MAEE test pilot, Squadron Leader KAMajor DFC, was killed while piloting one.

Eric carried out an inventory of the marine section for the period 1943-1945. The section consisted of three floatplane tenders, Vosper and Brooke Marine, a BP fire float, a supply tank, four marine tenders, a bomb barge and an 8 foot “dumb” dinghy.

Warrant Officer Riches was in charge of the ships. He was responsible to Vincent Drake, section chief. Other names included Muir, Ramsey, McMillan, Steady, Garstange, Currey, Read, and Eric Haynes.

The section also had 20 deckhands, eight boat builders, two boat builders carpenters, an electrician and a wireless operator from the RAF Helensburgh pool.

The duties involved trips to places like Greenock, Dunoon, Rothesay, Fairlie, Port Glasgow, Oban and up to Tiree, known as “the reef”. It was not unusual for a seaplane to be away from the base for 18 hours.

READ MORE: Eye on Millig: A renowned Victorian writer with a busy life tells stories about the peninsula

This unique ATV was driven by rotating propellers allowing for quick 180 degree turns. It was powered by two Rolls Royce engines, but the plywood hull was not up to this performance.

Eric of Helensburgh and Rhu’s best memories involved meeting his future wife, who was a WAAF at the Officers’ Mess, then Royal Northern Yacht Club. Her name was Lilian and she had trained in hotel silverware before the war.

Eric was summoned to the mess when officers were entertaining War Cabinet Minister Sir Stafford Cripps, and he was immediately impressed by the luxurious surroundings inside the Ardenvohr clubhouse.

â€œI imagined that the interior of this building was no different from Buckinghan Palace as it retained its pre-war comforts,â€ he said. â€œSir Stafford said he wanted to inspect the marine section after lunch, so I had to quickly get the men together.

â€œWe were all in dirty work clothes when he inspected us. He shook our hands and took the time to talk about our homework.

For Eric it was love at first sight in Ardenvohr with Lilian. The romance blossomed and they were married in September 1944 and enjoyed a week off rather than a 24 hour pass.

This gave them time to visit their respective relatives in different parts of the country.

They got back on the night train from Glasgow to Helensburgh. The last bus to Rhu had left.

â€œIt was a beautiful moonlit night, so we walked the two miles, dancing the last leg without our shoes and boots,â€ he recalls.

The couple were demobilized in 1946 and started life with nothing more than demobilization money. They had two sons, one of whom died as an adult, but otherwise they had a long and happy marriage until Lilian’s death in 1990.

In his later years, Eric began painting, using the artistry skills he acquired after the war with a printmaking company.

After his death, the Teignmouth Arts Action Group honored him as honorary president and pillar of the local arts community, and he mentioned his war service.

If you have a story from Helensburgh and Lomond’s past or present that you think might be suitable for a future Eye on Millig column, email the details to [email protected]