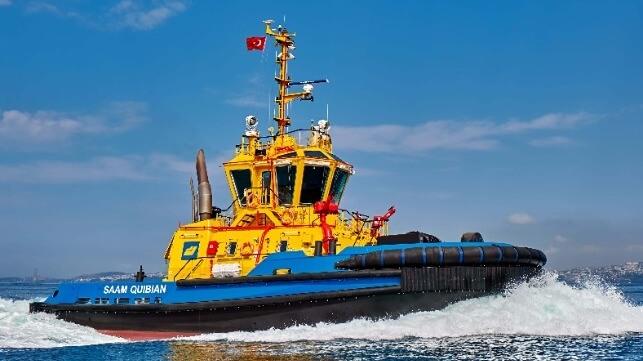 Sanmar Shipyards has delivered its seventh tug to SAAM Towage, which has joined the world’s third largest operator’s tug fleet operating in the waters of the Panama Canal. It was renamed SAAM QUIBIAN by its new owners.

The twin Z-drive tug is the sibling to five of the six other tugs Sanmar has delivered to SAAM Towage and, like them, is based on the exclusive Sanmar RAMparts 2400SX design by renowned Canadian naval architects Robert Allan Ltd. .

Matía de Luiggi, National Manager of SAAM Towage Panama, said: “This is the third tug we have added to our fleet in Panama since SANMAR, which shows how pleased we are with this versatile and energy-efficient design. of RAMparts 2400SX already successful. We have received very good feedback from customers, pilots and our captains. The compact design and power are appreciated in the waters of the Panama Canal.

Like all modern tugs of Sanmar’s popular RAMparts 2400SX series, the high level of automation of SAAM QUIBIAN’s machinery maximizes efficiency and reduces its impact on the environment.

Ruchan Civgin, Commercial Director of Sanmar Shipyards, said: “Energy efficiency and the need to minimize negative impact on the environment are rightly increasingly important factors when it comes to choosing the tug to buy. At Sanmar, we are leading the way to a sustainable future for our industry. Not only thanks to the technologically advanced and innovative designs of our tugboats, but thanks to the strict controls put in place to protect the environment in our shipyards. We are delighted that a major operator such as SAAM Towage has chosen us again to provide them with the power and efficiency they need in a modern fleet.

Measuring 24.4m LOA with a cast beam of 11.25m, a cast depth of 4.38m and a maximum operational draft of approximately 5.7m, SAAM QUIBIAN has been designed for maximum efficiency in the execution of seagoing vessel handling tasks. Powered by two Caterpillar 3516C main engines, each producing 2,100 kW at 1,600 rpm, SAAM QUIBIAN can reach a pulling power of 70 tons and a free rotation speed of at least 12 knots.

The five sisters of SAAM QUIBIAN are SAAM VALPARAISO, SAAM PALENQUE, ALBATROS, HALCON lll, SAAM CONDOR. The other tug Sanmar has delivered to SAAM Towage is MATAQUITO ll, which is based on the still exclusive Sanmar RAstar 2900SX design by Robert Allan Ltd.

The products and services described in this press release are not endorsed by The Maritime Executive.