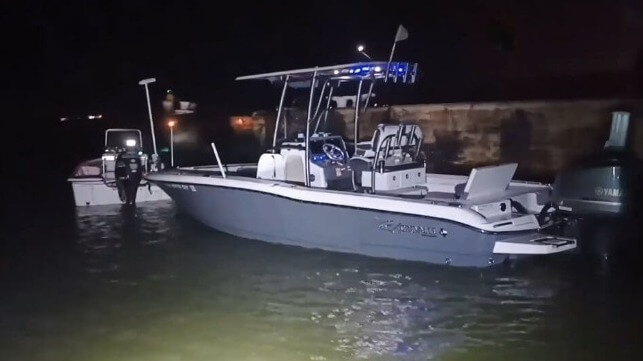 On Saturday, the US Coast Guard and a local fire and rescue agency rescued six people after a barge collided with two motorboats near Goat Island, Texas.

Coast Guard Sector Houston-Galveston watchmen received a VHF distress call from the captain of a tugboat at 9:26 p.m. Saturday night. His barge trailer had collided with two pleasure boats, one with two people on board and the other with four people on board. The captain reported that the boaters had fallen into the water and were donning or holding life jackets.

Watchstanders issued an urgent request for assistance to nearby navigation and dispatched a helicopter crew, along with a response boat crew from Coast Guard Station Galveston.

Once there, the boat’s crew pulls two people from the water and embarks a boater from the tug. A Port Bolivar fire crew pulled the other three survivors out of the water. After identifying the six boaters, rescue teams transferred them ashore for a medical assessment. Despite the potential severity of the crash, no injuries were reported.

Both pleasure boats were recovered and video from the scene shows them afloat and in good condition.

“This rescue is a good reminder that on-water emergencies can happen without warning,” said Petty Officer 2nd Class Chantz Roche, butler for the response. “The Coast Guard urges boaters to practice boating safely by wearing life jackets, using kill switches, and having appropriate communications equipment on board, such as a VHF-FM radio.”