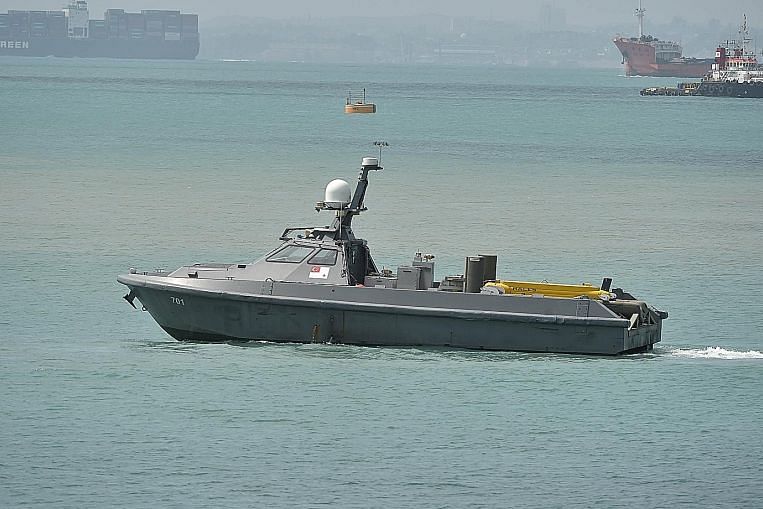 The Republic of Singapore Navy’s Unmanned Surface Ships (USVs) have proven their ability to neutralize sea mines and are now mission ready.

The use of such platforms is expected to result in a significant reduction in human labor, as well as the time required to detect and clear sea mines.

The two USVs – with a one-shot mine disposal system (EMD) controlled remotely from shore – succeeded in neutralizing an underwater target on January 29 in the waters off the Southern Islands.

Ms. Siow Chengxin, a senior engineer at the Defense Science and Technology Agency (DSTA), told reporters last Friday that the gunnery exercise was one of the last steps in verifying that the USVs could function well.

“This is an important milestone validating our engineering efforts on performing the K-STER C vehicle control … wirelessly and safely,” she said.

K-STER C refers to an EMD light vehicle from the French manufacturer ECA Group. It is loaded in a cartridge mounted on a USV.

The validation means that USVs used for mine countermeasures (MCMs) can now identify and neutralize submarine threats, a capability unique in the world.

Col. Wong Chng Tong, commander of the 6th Flotilla, which leads the development of unmanned capabilities for surface craft and submarines, said the use of unmanned systems is the next frontier for maritime operations.

The deployment “allows the navies to conduct operations more efficiently with fewer personnel and at a lower cost,” he added in an email interview.

It also reduces the military’s exposure to threats, such as underwater explosives or improvised explosive devices, he noted.

Colonel Wong said the sea mines laid by the attackers were the main submarine threat that has hindered safe transit in the past. The dangers have evolved to include improvised explosive devices that can be easily deployed by terrorists.

The Singapore Navy began experimenting with USV deployment over ten years ago. USVs with the EMD system were introduced in 2018, with the ability to identify but not neutralize mines.

The EMD system on manned MCM ships needs a crew of 33, but the USV only needs two – one operator to control the vessel and the other the EMD system console.

Manned Bedok-class MCM ships are still in service, having completed a mid-life upgrade in 2014.

The Navy operates two types of MCM USVs – one with EMD and the other with sonar equipment, called a towed synthetic aperture sonar system.

A third variant of the USV is used for coastal patrols.

These USVs can be operated remotely, either on land or potentially on another vessel.

Typically, for MCM missions, a USV with the sonar system is deployed to perform underwater analyzes. Once the threat is located, another USV with the demining system is activated. The EMD system is lowered into the water to approach the threat for identification and neutralization.

With the push of a button, an operator can launch it from their cartridge, she added. On a manned MCM ship, it takes around an hour for four people to deploy the K-STER C in the water – from a storage area to an open deck, then by a crane.

The project was not without challenges, especially those due to the Covid-19 pandemic. It took four months to prepare for live fire day, said Ms Siow, who has worked at DSTA for 13 years.

“I still remember when we managed to fire the second shot. We were delighted and felt our efforts paid off,” she added.

A stranded ship off Karachi has been refloated

Tourist arrested for driving Hyundai i20 in the sea in Goa