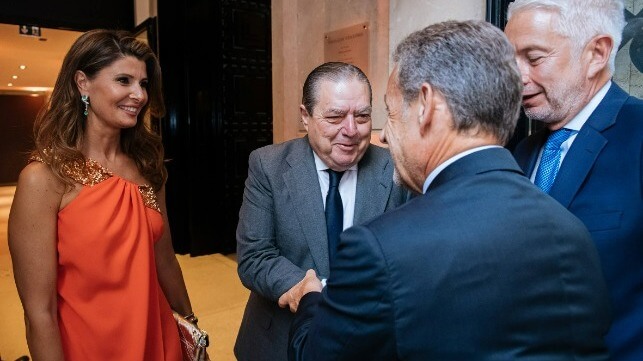 The former President of the French Republic Nicolas Sarkozy in the period 2007-2012 presented today in Paris to the President of Boluda Corporación Marítima, Vicente Boluda Fos, the medal of Chevalier de la Légion d’honneur.

This recognition demonstrates the commitment of Vicente Boluda Fos in the neighboring country, where Boluda France, a subsidiary of the international towing division Boluda Towage, plays a crucial role in the safety of operations in French waters and ports, as well as in the countries from the west coast of Africa. Boluda France was created in 2007 following the acquisition of the French company Les Abeilles, whose activity dates back to 1864.

The event took place this afternoon at the Pavillon Vendôme in the French capital, in the presence of around 250 people, including the family, friends of the Valencian shipowner, employees and authorities, including the former Prime Minister Spanish, Felipe González; the Spanish ambassador to France, Victorio Redondo; the finance minister of the regional government of Valencia, Arcadi España; the President of the Provincial Council of Valencia, Antoni Gaspar, and the President of the Port Authority of Valencia, Aurelio Martínez.

Address
In his speech after receiving the award, Vicente Boluda began his speech with these words: “Mr. Mr. President, thank you dear friends for being here this evening. Today, I receive two distinctions: This decoration, of course, is the most prestigious of all. For a Spanish businessman who has worked in France for fifteen years, this is the finest distinction. There is nothing like it in the world for me. The second honor is you, Mr. President: you have agreed to present this decoration, further proof of your great attachment to my country, Spain”.

The Spanish businessman stressed that Nicolas Sarkozy has “done a lot for our country in the past and still does today. They say there is no love, there is only proofs of love. As far as Spain is concerned, you have shown us so much! Thank you Mr. President! our two countries are destined to work together, I am convinced of that. You have before you many Spanish friends who have admired your work and who also feel very honored by your presence tonight. We are very proud to have you here with us”.

Vicente Boluda made reference to his family during this event, stressing that “for you as for me, the family is sacred. This Legion of Honor does not belong to me alone, and I want to dedicate it to the one of whom I think deeply this evening: my grandfather who, more than a hundred years ago, dared to embark on this adventure”.

On the other hand, Boluda stressed that “I have always loved France”, pointing out that his mother’s surname Fos “comes from a village in Haute-Garonne on the slopes of the Pyrenees” and recalling his first summers in Biarritz, “the first at only four months”.

Regarding the purchase of the tugboat company Les Abeilles in 2007, the president of Boluda Towage, the international tugboat division of Boluda Corporación Marítima, pointed out that “at that time people told me that I was crazy , that we would fail”. “You had to be crazy not to buy it. Today, the company is stable, profitable and prosperous. From the start,” he added, “I wanted Boluda France to be an authentically French”.

The recipient of the Chevalier de la Légion d’Honneur medal wished to share this distinction with his children and his employees, “who through their work and their passion have contributed to making the company what it is today, a company present in 22 countries, with a towing service division, Boluda Towage, in 100 ports and with a fleet of 400 vessels.” He added: “But without France, without its energy and know-how, we would not could never have become what we are, namely the world leader”.

Boluda Towage has a fleet of nearly 400 vessels in its subsidiaries in Spain, France, Europe, America and Offshore; it operates in 100 ports in 18 countries; it employs more than 6,000 people and has a unique expertise in port services, being the second company in the world in the towing sector, thanks to its entrepreneurial know-how, in which the French division of the company has played a role key.


The products and services described in this press release are not endorsed by The Maritime Executive.